The Robert Senior Collection consists of twenty-four birch bark scrolls containing at least forty-one Buddhist texts in the Gāndhārī language and Kharoṣthī script. Dating to the early second century CE, it is the largest extant collection of Gandhāran sūtras, or discourses of the Buddha, and thus provides invaluable information about the production and transmission of such texts during a period when Buddhist literature was spreading rapidly from Gandhāra to Central and East Asia. The collection and the pot in which it was discovered also shed light on an important Buddhist practice, the burial and veneration of manuscripts as relics at stūpa sites, which were the ritual centres of Buddhism in ancient South Asia.

The collection is named after its owner, Robert Senior of Butleigh, Glastonbury, who has generously made the manuscripts available to scholarly research (Allon 2003: 21).

The collection is an anthology, that is, an intentional selection of texts from larger collections known to the scribe who wrote out the entire collection. It is made up almost completely of sūtras, which present the basic tenets of Buddhist thought and practice, usually in the form of dialogues and narratives. Some of the topics include the origin of pleasure and pain, the nature of the self, and meditative absorption. The majority of the texts, twenty-six in total, have parallels in the Saṃyutta-nikāya or Saṃyuktāgama collections known in Pali, Chinese and Sanskrit, which contain texts “grouped” (Pali saṃyutta, Sanskrit saṃyukta) according to themes. Three others lack parallels but also probably belonged to a Gāndhārī Saṃyuktāgama. Four sūtras have primary parallels in the Majjhima-nikāya/Madhyamāgama (“Middle Length Discourses”), one in the Dīgha-nikāya/Dīrghāgama (“Long Discourses”), and one group of karmic stories called the Anavatapta-gāthā has parallels in various collections in other languages. The remaining texts include narratives about the life of the Buddha or his monks which have parallels primarily in vinaya texts, or collections of rules for monks and nuns. Two further scrolls contain an index of titles or references to fifty-five sūtras, at least twelve of which correspond to texts on other Senior manuscripts (Allon 2014: 25-26).

The exact provenance of the manuscripts is unfortunately lost, which makes understanding their original context difficult. It has been reported that the manuscripts were found “in an underground chamber” (Allon 2014: 21), and Salomon has suggested that the likely findspot was in or near Haḍḍa, Afghanistan, near modern Jalālābād, where many Buddhist stūpas and monasteries have been discovered (Salomon 2003: 74). The manuscripts were contained in an inscribed earthenware pot which also provides important contextual clues as to their date and function (see below). They were conserved by the British Library’s India Office and Oriental Collections in 1999 and are currently held on loan in the University of Washington’s Special Collections. There is a strong case for dating this collection to approximately 140 CE (Allon et al. 2006; 2014: 22)

It appears that the manuscripts were part of a commissioned collection that was ritually interred in a stūpa as a meritorious practice. Thus, the manuscripts would have functioned as relics of the Dharma to be venerated by pilgrims (Allon 2007: 4; 2014: 23). The veneration of relics, including bodily relics (physical remains of the Buddha and other arhats) and contact relics (e.g., the Buddha’s begging bowl or robe), was a widespread practice in ancient Gandhāra. 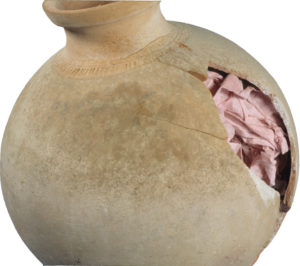 The pot in which the manuscripts were found bears inscriptions on both the vessel and the lid that mark it as having been established in a stūpa (thu[ba]m[i]) by a person named Rohaṇa, son of Mas̱umatra (Salomon 2003: 76). It is likely that Rohaṇa was a wealthy layman who funded the production and interment of the manuscripts.

The inscriptions have been translated by Salomon (2003b: 74–8) as follows:

[pot] “In the year [twelve], in the month Avadunaka, after (*five) days; at this time [this] was established in honor of [his] father and mother, in honor of all beings; [the donation] of Rohaṇa, son of Mas̱umatra.”